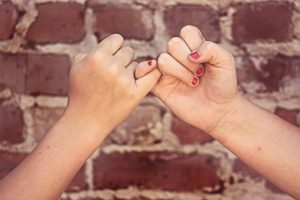 Some children want to solve everyone’s problems. Especially when it comes to friendships. They want everyone to get along with each other and when there is an argument they will get involved as the peacemaker and try to rectify the situation.

It is a wonderful trait to have but often this child spends too much of their time making sure everyone else is happy rather than focusing on their own friendships (which may have issues of their own).

So do we want to change our child from being this kind, caring soul? Do we want them to put more energy into their own clique?

I think if your child is happy in their friendship group then of course be pleased that they want to get involved, (so long as it is in a progressive, wanted and in a diplomatic way). If they aren’t then I think they need to start making their own group work and putting their good conflict resolution tactics into practice there.

Talk to them about the skills they are using with other people and the words of advice they are giving others.  Get them to see how they could use similar words in their own friendships to make them stronger, better, happier. They are doing it already.

They may be unsure of sorting their own friendships out but if they are making them unhappy there is only one thing to do and that is to address the situation and start to change it for the better.